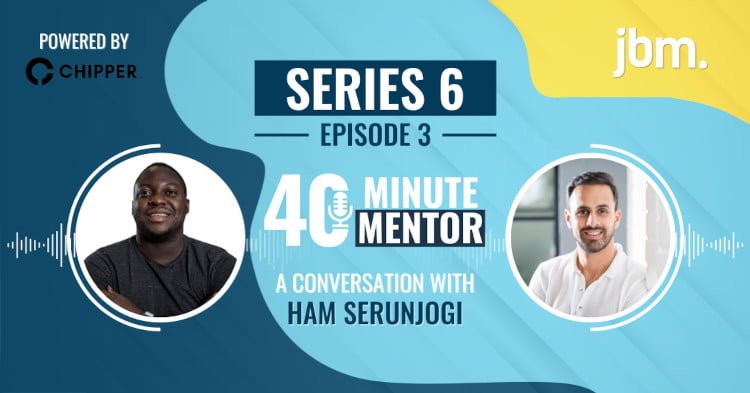 In this week’s episode of 40 Minute Mentor, host James Mitra talks to Ham Serunjogi, co-founder & CEO at Chipper Cash – one of the most successful and high-profile start-ups in Africa.

Ham had an incredibly successful career at Facebook, as a former Client Manager.

Speaking with James about how he first got through the door as a confident intern, with a ‘nothing to lose’ mentality, he says: “Internship applications are very rigorous and painful because you get a lot of rejections. The few yes’s you do get are the ones you don’t really want.

“I figured Facebook were receiving 40,000 internship applications every summer, so I had to do something that would make me stand out. I went directly to the source and emailed the Chief Operating Officer Sheryl Sandberg, saying, hey, I’m looking to apply for an internship at Facebook, and would appreciate your help.

“It was one of those things that I thought would never work, but Sheryl responded and connected me to the team in New York who I interviewed with. I got the job, and that’s how my path to Facebook began.”

Speaking on the importance of not sticking to one path, and how that helped him succeed in his career, Ham says: “In life, I think there’s a nonlinear path of getting what you want to achieve. Part of why I say this is because when I emailed Sheryl to ask for an internship, that was me leaning on the side of me that appreciated that sometimes to get to where you want to go, you have to go on a different path to what is expected of you.

“The thing about entrepreneurship, and growing a small business, is that you’re having to take nonlinear paths to sort of stay alive, and solve key problems of the business every day. I truly appreciate the value of that, and I’ve used that mentality many times in my career.”

40 Minute Mentor is available on Apple, Spotify, Soundcloud, and all major podcast platforms.

Is YouTube looking to hire someone to look after podcasts?

How I transitioned from broadcasting to podcasting

Daisy Onubogu on a new episode of 40 Minute Mentor Podcast

‘Sauna twins’ turn up the heat on family business podcast

Why do all podcasters need RSS?