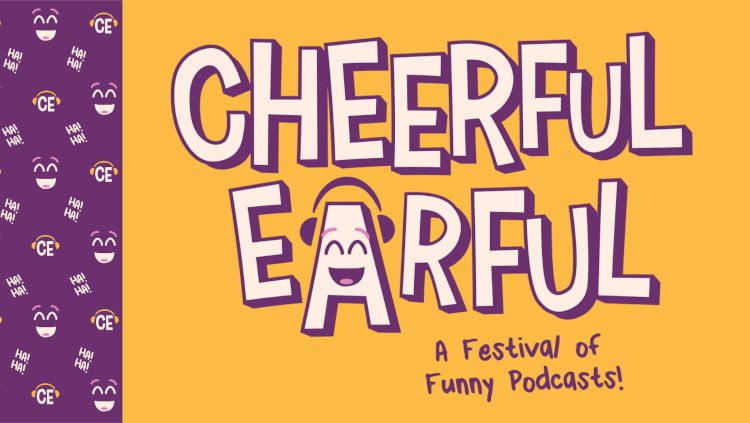 Cheerful Earful is a new comedy-podcast festival coming to London this Autumn.

The first of its kind in the UK, it’s a celebration of funny shows, big and small where audiences will have the opportunity to watch their favourite podcasts live, as well as discovering new shows.

From the podfather Richard Herring returning to his Balham roots with RHLSTP, to less-than-serious history pod, We Are History with Angela Barnes and John O’Farrell, a varied range will be included. Plus, many of these pods will feature all-star guests from the world of British comedy and beyond.

The festival is taking place across multiple venues run by leading London pub group, Three Cheers Pub Co., who regularly host some of London’s most popular comedy nights including Banana Cabaret at The Bedford and Always Be Comedy at The Tommyfield. The full line-up is as follows, with further acts to be confirmed.

Festival founder Giles Gear from Giddy Aunt Comedy said: “The UK is full to the brim with brilliant pods that amuse and entertain, and so we want to create a festival that celebrates them, from established shows to lesser-known gems. In particular, we wanted smaller shows to have the opportunity to connect with their existing fans as well as finding a new audience, while performing in one of the beautiful venues owned by Three Cheers. This is just the beginning – we have big plans for the future”.

Tom Peake, co-owner and founder of Three Cheers Pub Co said: “Providing excellent comedy shows is key at Three Cheers Pub Co. We loved the originality of a comedy podcast festival and can’t wait to host such a fabulous line up across our venues”.

Prev Next
All Podcasting News
We use cookies on our website to give you the most relevant experience by remembering your preferences and repeat visits. By clicking “Accept All”, you consent to the use of ALL the cookies. However, you may visit "Cookie Settings" to provide a controlled consent.
Cookie SettingsAccept All
Manage consent

This website uses cookies to improve your experience while you navigate through the website. Out of these, the cookies that are categorized as necessary are stored on your browser as they are essential for the working of basic functionalities of the website. We also use third-party cookies that help us analyze and understand how you use this website. These cookies will be stored in your browser only with your consent. You also have the option to opt-out of these cookies. But opting out of some of these cookies may affect your browsing experience.
Necessary Always Enabled
Necessary cookies are absolutely essential for the website to function properly. These cookies ensure basic functionalities and security features of the website, anonymously.
Functional
Functional cookies help to perform certain functionalities like sharing the content of the website on social media platforms, collect feedbacks, and other third-party features.
Performance
Performance cookies are used to understand and analyze the key performance indexes of the website which helps in delivering a better user experience for the visitors.
Analytics
Analytical cookies are used to understand how visitors interact with the website. These cookies help provide information on metrics the number of visitors, bounce rate, traffic source, etc.
Advertisement
Advertisement cookies are used to provide visitors with relevant ads and marketing campaigns. These cookies track visitors across websites and collect information to provide customized ads.
Others
Other uncategorized cookies are those that are being analyzed and have not been classified into a category as yet.
SAVE & ACCEPT